You are Here: Home Page > (none) > Board for Professional Medical Conduct - 2001 Annual Report

Board for Professional Medical Conduct

The Board for Professional Medical Conduct was created by the New York State Legislature in 1976 and serves as a key resource in the state's disciplinary oversight of physicians and physician assistants.

The board serves as a key component in the state's disciplinary process. The board's objective has been to ensure that the physician disciplinary structure is qualitatively sound and that it is correctly perceived as fair and effective by both physicians and the public. Physician members are appointed by the Commissioner of Health with recommendations for membership received largely from medical and professional societies. The Commissioner of Health, with approval of the governor, appoints lay members of the board. By law, the Board of Regents may appoint 20 percent of the board's membership.

In disciplinary matters, board members serve on committees of three, two physicians and one non-physician, who are appointed by the board chair. Disciplinary committees include investigation, hearing and license restoration. The Administrative Review Board (ARB) is a standing committee consisting of three physicians and two lay members. Board members also serve on a variety of committees that address procedural and emerging policy issues.

The roles of the board and OPMC are delineated in Public Health Law Section 230. The definitions of misconduct are found in Sections 6530 and 6531 of the Education Law.

OPMC provides staff to carry out the objectives of the board. OPMC's mission is to protect the public through the investigation of professional misconduct issues involving physicians and physician assistants. Through its investigative and monitoring activities, OPMC strives to deter medical misconduct and promote and preserve standards of medical practice.

OPMC received 6,983 complaints in 2001. It is required by law to investigate every complaint it receives. Many complaints involve issues over which OPMC has no jurisdiction or authority, such as billing disputes or physician rudeness. In these instances, a physician is not aware of the complaint because they are closed administratively. In other cases, a complaint is investigated but insufficient evidence is found to support charges of misconduct, and the investigation is concluded.

When someone does file a complaint with OPMC that appears to involve possible misconduct, the physician will be notified either by letter or through a phone call. Generally, unless specifically stated otherwise, a letter requesting patient records is an indicator that a complaint has been filed against a physician and an investigation is underway. An investigator may call and say there is a complaint and ask for records or to discuss the matter.

State Public Health Law requires OPMC to keep confidential the names of any individuals who file complaints. The source of a complaint may not be the patient whose medical records are requested, but rather a friend, relative or health care worker. Sometimes patient medical records are requested because a health facility has reported to OPMC, as required by law, that it has taken disciplinary action against a physician.

While the law protects the identity of the complainant, it also preserves a physician's right to be heard. State Public Health Law requires that a physician be given the opportunity to be interviewed by OPMC staff to provide an explanation of the issues under investigation if the matter is going to be referred to the board. This interview may be conducted in person or over the telephone, and the physician may have an attorney present.

In many cases, even if the matter does not result in a referral to the board, the physician is contacted to respond to the issues in the complaint. Cases are not referred to the board when there is insufficient evidence to proceed or the issues are out of its jurisdiction. Physicians contacted in such cases are advised by letter that the matter is closed.

The committee may recommend to the Commissioner of Health that a physician's practice be summarily suspended because he or she poses an imminent danger to the public health. Committee members can also order non-disciplinary administrative warnings or consultations. If the committee finds there is not sufficient evidence to support charges, the physician receives a closure letter indicating the investigation has concluded.

If the case is voted to a hearing or the Commissioner of Health orders a summary suspension, another three-member panel, including two physicians and a lay member, is drawn from the board. A hearing is much like a trial, although in this case the board panel serves as the jury and may also ask questions. An administrative law judge is present to assist the panel on legal issues. The state's case is presented by a staff attorney and physicians generally also choose to be represented by counsel. At the hearing, evidence is presented and testimony may be given by witnesses for both sides.

A hearing panel may decide to dismiss some or all of the charges against a physician. If the panel sustains charges, penalties can range from a censure and reprimand to revocation. The panel may also suspend or annul a physician's license, limit his or her practice, require supervision or monitoring of a practice, order retraining, levy a fine or require public service. Revocations, actual suspensions and license annulments are immediately made public and penalties go into effect at once.

Other penalties are not made public until the period for requesting an appeal has passed and, if there is an appeal, disciplinary action is stayed until there is a resolution. Either side may appeal the decision of a hearing panel to the ARB.

Notices of appeal must be filed within 14 days of the service of a hearing committee decision. Both parties have 30 days from the service of the notice of appeal to file briefs and then another seven days to file a response to the briefs. There are no appearances or testimony in the appeals process. During an appeal, revocations, actual suspensions and annulments are not stayed. However, other penalties are stayed until the ARB acts.

The ARB reviews whether or not the determination and penalty of the hearing committee are consistent with the hearing panel's findings and whether the penalty is appropriate. The ARB must issue a written determination within 45 days after the submission of briefs.

The Year in Review

The Joint Committee between the Committee for Physicians' Health (CPH) and the Board for Professional Medical Conduct (BPMC) is charged to develop recommendations that will enhance the continued efforts of New York State's impaired physician programs to both protect the public and assist physicians in need. At the February 5, 2001 meeting of the Joint CPH-BPMC Committee of the Impaired Physicians Programs, two subcommittees were appointed and charged with reviewing two specific issues (boundary issues and the restoration process) and making recommendations for the committee's consideration. Each subcommittee consists of four Joint CPH-BPMC Committee members and one staff person from each program.

The Subcommittee on Boundary Issues addressed concerns that physicians may not be fully aware of the issues and consequences surrounding boundary violations. The subcommittee focused on developing educational materials that would address several types of boundary issues, including financial, social and sexual, for physicians. Working with the authors' permission, the subcommittee modified an article entitled "Professional Boundaries in the Physician-Patient Relationship" by Glenn Gabbard, M.D. and Carol Nadelson, M.D. The subcommittee is exploring various routes of circulation among the medical community including the physician license registration process. Release of a brochure is planned for summer 2003.

Each year about 12 physicians petition the board for approval to return to the active practice of medicine following treatment for their addictions. The restoration process involves a formal proceeding during which a board committee reviews records and hears testimony attesting to the fitness of the physician to practice safety and competently. Although not required, physicians are usually accompanied by legal counsel. Written procedures to help guide physicians and their attorneys through the restoration process are being developed and will be presented to the Joint CPH-BPMC Committee in summer 2003.

The Subcommittee on Enhancing the Physician's License Restoration Process identified the following activities that would enhance the restoration process:

The impaired physicians programs currently utilize one of four national centers specializing in the evaluation and treatment of impaired medical professionals in making the determination of impairment. A new assessment program has been identified at the Columbia Presbyterian Medical Center in northern Manhattan. The subcommittee will also assess whether the Columbia Neuropsychiatric Evaluation Service might be a useful resource for our programs.

Three regional BPMC training seminars on the impaired physician were held in New York City and Syracuse and nearly all board members attended. Participant evaluations were highly complimentary of the training and it is expected that an advanced training program will be offered to board members in summer 2003.

The subcommittee will continue to identify those lifestyle behaviors that are supportive of long-term recovery from addiction.

The 2001 Biennial Meeting of the Board for Professional Medical Conduct was held in Albany on November 2-4, 2001. One hundred and twenty-eight members, representing over 80 percent of the board, attended the weekend session. This meeting was part of the board's ongoing efforts to provide training on issues pertinent to today's practice of medicine and the disciplinary system.

Specialists working in the forefront of medicine discussed such exciting and pertinent topics as the ethics of the new medicine, including virtual reality medicine, the genome project, organ allocation and medical research.

Training for board members focused on analyzing the elements of a board decision (developing consistency between the finding of facts, discussion and penalty). Sessions also provided updates on Department of Health and OPMC activities regarding physician profiling, fraud and office-based surgery. Special guest speakers included Commissioner of Health Antonia C. Novello, M.D., M.P.H., Dr.P.H. and Chief Judge Judith Kaye of the New York State Court of Appeals.

The Corporate Practice of Medicine

During 2001, the board took its first action against business entities that practice medicine. Ten professional corporations (PCs) and one registered limited liability partnership (RLLP) were disciplined for fraudulent practice reasons. All 11 entities had their certificates of incorporation revoked, or in the case of the RLLP, its certification of registration was revoked. Five of the 11 entities were disciplined after hearings and three of those were fined $10,000 each. The remaining six entities were disciplined through consent agreements and orders.

During the past year, technological enhancements were implemented resulting in greater and easier access by the public to information regarding physicians and disciplinary actions.

*In 1996, Public Health Law 230 was amended to permit a summary suspension when a licensee has pleaded or been found guilty or convicted of committing an act constituting a felony under New York State Law or federal law, or the law of another jurisdiction which, if committed within this state, would have constituted a felony under New York State law, or when the duly authorized professional agency of another jurisdiction has made a finding substantially equivalent to a finding that the practice of medicine by the licensee in that jurisdiction constitutes an imminent danger to the health of its people....

Disciplinary Actions by the Board for Professional Medical Conduct 2001 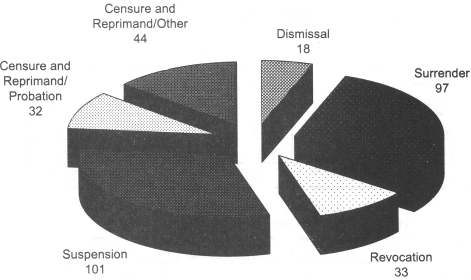 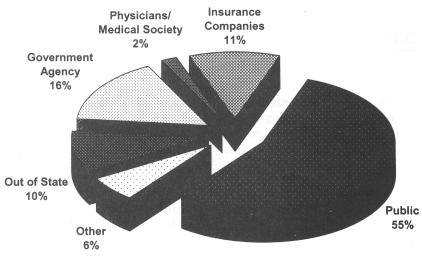