You are Here: Home Page > (none) > Board for Professional Medical Conduct 2005 Annual Report

Board for Professional Medical Conduct

The Board for Professional Medical Conduct (board) was created by the New York State Legislature in 1976 and serves as a key resource in the state's disciplinary oversight of physicians and physician assistants.

The board serves as a key component in the state's disciplinary process. The board's mission is to protect the public from medical negligence, incompetence and illegal or unethical practice by physicians, physician assistants and specialist assistants. Physician members are appointed by the Commissioner of Health with recommendations for membership received largely from medical and professional societies. The Commissioner of Health, with approval of the Governor, appoints lay members of the board. By law, the Board of Regents may appoint 20 percent of the board's membership. The board's membership at the end of 2005 was comprised of 142 physicians (representing 24 different medical specialties) and 56 lay members, of whom 5 are physician assistants.

The roles of the board and the Office of Professional Medical Conduct (OPMC) are delineated in Public Health Law Section 230. The definitions of misconduct are found in Sections 6530 and 6531 of the Education Law.

OPMC provides staff to carry out the objectives of the board. OPMC's mission is to protect the public through the investigation of professional misconduct issues involving physicians. (In this report, when using the term physician, it refers to licensed MDs, DOs, and licensed, certified physician assistants and specialist assistants.) Through its investigative and monitoring activities, OPMC strives to deter medical misconduct and promote and preserve the highest standards of medical practice.

OPMC is required by law to investigate every complaint it receives. Many complaints involve issues over which OPMC has no jurisdiction or authority, such as billing disputes or physician rudeness. In these instances, a physician is not aware of the complaint because they are closed administratively. In other cases, a complaint is investigated but insufficient evidence is found to support charges of misconduct, and the investigation is concluded.

When someone does file a complaint with OPMC that appears to involve possible misconduct, the physician will be notified either by letter or through a telephone call. Generally, unless specifically stated otherwise, a letter requesting patient records is an indicator that a complaint has been filed against a physician and an investigation is underway. An investigator may call and say there is a complaint and ask for records or to discuss the matter.

State Public Health Law requires OPMC to keep confidential the names of any individuals who file complaints. The source of a complaint may not necessarily be the patient whose medical records are requested, but rather a friend, relative or health care worker. Sometimes patient medical records are requested because a health facility has reported to OPMC, as required by law, that it has taken disciplinary action against a physician.

While the law protects the identity of the complainant, it also preserves a physician's right to be heard. State Public Health Law requires that a physician be given the opportunity to be interviewed by OPMC staff to provide an explanation of the issues under investigation if the matter is going to be referred to the board. This interview may be conducted in person or over the telephone, and the physician may have an attorney present.

In many cases, even if the matter does not result in a referral to the board, the physician is contacted to respond to the issues in the complaint. Cases are not referred to the board when there is insufficient evidence to proceed or the issues are out of its jurisdiction. Physicians contacted in such cases are advised by letter that the matter is closed.

The committee may recommend to the Commissioner of Health that a physician's practice be summarily suspended because he or she poses an imminent danger to the public health. If the Director of OPMC, after obtaining the concurrence of a majority of a committee on professional conduct, and after consultation with the Executive Secretary, determines that there is substantial evidence of professional misconduct of a minor or technical nature or of substandard medical practice which does not constitute professional misconduct, the Director may issue an administrative warning and/or provide for consultation with a panel of one or more experts, chosen by the Director. Administrative warnings and consultations are confidential.

If the case proceeds to a hearing or the Commissioner of Health orders a summary suspension, another three-member panel, including two physicians and a lay member, is drawn from the board. A hearing is much like a trial, although in this case the board panel serves as the jury and may also ask questions. An administrative law judge is present to assist the panel on legal issues. The state's case is presented by a staff attorney and physicians generally also choose to be represented by counsel. At the hearing, evidence is presented and testimony may be given by witnesses for both sides.

A hearing panel may decide to dismiss some or all of the charges against a physician. If the panel sustains charges, penalties can range from a censure and reprimand to revocation. The panel may also suspend or annul a physician's license, limit his or her practice, require supervision or monitoring of a practice, order retraining, levy a fine or require public service. Revocations, actual suspensions and license annulments are immediately made public and penalties go into effect at once.

Other penalties are not made public until the period for requesting an appeal has passed and, if there is an appeal, disciplinary action is stayed until there is a resolution. Either side may appeal the decision of a hearing panel to the ARB.

Notices of appeal to the ARB must be filed within 14 days of the service of a hearing committee decision. Both parties have 30 days from the service of the notice of appeal to file briefs and another 7 days to file a response to the briefs. There are no appearances or testimony in the appeals process. During an appeal, revocations, actual suspensions and annulments are not stayed. However, other penalties are stayed until the ARB acts.

The ARB reviews whether or not the determination and penalty of the hearing committee are consistent with the hearing panel's findings and whether the penalty is appropriate. The ARB must issue a written determination within 45 days after the submission of briefs.

The Joint Committee of the Committee for Physicians' Health (CPH) and the Board for Professional Medical Conduct is charged to develop recommendations that will enhance the continued efforts of New York State's impaired physician programs to both protect the public and assist physicians in need.

The joint committee created a subcommittee to identify ways in which there could be an exchange of information which would complement program efforts to get physicians who may be impaired needed assistance as early as possible. The committee identified a number of areas where information could legally be shared between the two programs in furtherance of the stated objective. Policies and procedures were implemented to facilitate the exchange of this information.

Hospitals are statutorily required to report to the board any information that reasonably appears to show that a licensee is guilty of misconduct. Each year approximately 20% of the hospital reports of misconduct to OPMC involve allegations of possible impairment. In 2005, 53 board final actions were related to impairment issues.

In November 2003, Commissioner Novello sent a letter to all hospital administrators reminding them of the reporting requirements. To increase the understanding of the reporting requirements and to assist in the early intervention of impaired physicians, the joint committee has directed a subcommittee to develop guidance to hospitals on the need for reporting and to develop a plan to disseminate educational material about available resources.

Members of the Board for Professional Medical Conduct and staff of OPMC served on the Department's reconvened Committee on Quality Assurance in Office-based Surgery. A final report and recommendations were developed in the areas of accreditation, adverse event reporting, regulations and guidelines and was presented to the New York Public Health Council in mid-2006.

The Federation of State Medical Boards (FSMB) is a national not-for-profit organization representing 70 medical boards within the United States and its territories. As the representative body and forum for physician licensing and disciplinary boards, FSMB occupies a unique position of responsibility.

FSMB continues to view New York as a leader among state medical boards. At its 2005 annual meeting, Ms. Carmela Torrelli was appointed to the Federation's Finance Committee and the Director of OPMC serves on its Advisory Council of Board Executives. Other board members have served on the Board of Directors, various committees of FSMB or have been featured speakers at the Federation's Annual Meetings.

In January 2002, representatives of the Department and OPMC testified before a joint committee of the New York State Assembly Health, Higher Education and Codes Committees regarding the physician discipline process in New York State. The purpose of the hearing was to examine whether important elements of due process are lacking and whether there are ways to expedite the process, to better protect the public and rights of the accused.

The proposed amendments to Public Health Law Section 230 provided for procedural and substantive changes to many areas of the process, including the definition of lay members of the Board, the physician interview process, investigation committee procedures and hearing and appeal processes. In addition, the bill included provisions for an evaluation program to determine a physician's competency to practice medicine and an informal settlement conference to resolve cases of medical misconduct.

Governor Pataki vetoed the legislation in 2004, citing concern that the bill could result in unnecessary and inappropriate delays in the process and impede the efforts of OPMC and the board to protect the public against the small minority of physicians who are guilty of misconduct. The Governor also noted his unwillingness to compromise the dramatic improvements that New York has achieved in this program area over the last ten years by approving a series of procedural and substantive changes that could make the process more cumbersome and complex.

In September 2003, Governor Pataki signed legislation requiring the board or OPMC to notify the appropriate district attorney when, based upon a reasonable belief, a criminal offense has been committed by a physician. As of the end of 2005<,

The New York Patient Health Information and Quality Improvement Act signed by Governor Pataki in 2000 provided for immediate access to physician information through the Internet.

Certain information is required to be available on all physicians who are registered in New York State and includes information such as: medical education, specialty board certifications, hospital privilege restrictions, malpractice history, criminal convictions and public disciplinary actions. Physicians may also provide extra information (optional information) including; practice locations, published research articles, professional and community service activities and health plan information. The physician profile information can be accessed through the Department's web site, www.health.state.ny.us or directly via www.nydoctorprofile.com.

Information regarding the Office and Board for Professional Medical Conduct can be accessed through the Department's web site, www.health.state.ny.us and click on "Physician Discipline." All disciplinary actions taken since 1990 are posted on OPMC's site, as well as information on how to file a complaint, brochures regarding medical misconduct, frequently asked questions, and relevant statutes.

* In 1996, Public Health Law 230 was amended to permit a summary suspension when a licensee has pleaded or been found guilty or convicted of committing an act constituting a felony under New York State Law or federal law, or the law of another jurisdiction which, if committed within this state, would have constituted a felony under New York state law, or when the duly authorized professional agency of another jurisdiction has made a finding substantially equivalent to a finding that the practice of medicine by the licensee in that jurisdiction constitutes an imminent danger to the health of its people… 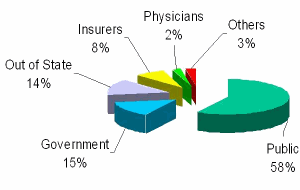